As stated in an earlier blog post, buying fake Spotify plays is a recipe for disaster. They give you meaningless streams, low royalties, diminishes your chances of getting into Spotify’s algorithm-driven playlists and can get you suspended. If you still want to go down this path despite all the drawbacks, go ahead, but you’re much better off getting real placements.

There are a lot of companies that supply fake plays. Some are at least honest and upfront about their services. Others pretend to offer genuine playlist placements. These are outright scammers that are tarnishing our music industry and exploiting up and coming artists.

Here’s a guide on how to spot scammers

At Midnite Blaster, we always make sure that playlists are genuine and not artificially boosted by bots before getting our clients on there. If you’re contacting curators and trying to get on playlists yourself, you need to be able to tell if those playlists are genuine. Spotting scammers is a bit like detective work but here are some of the red flags that we look out for when vetting playlists.

The “About” tab of an artist on Spotify

The “About” tab of an artist can give us a lot of clues about any suspicious activities. 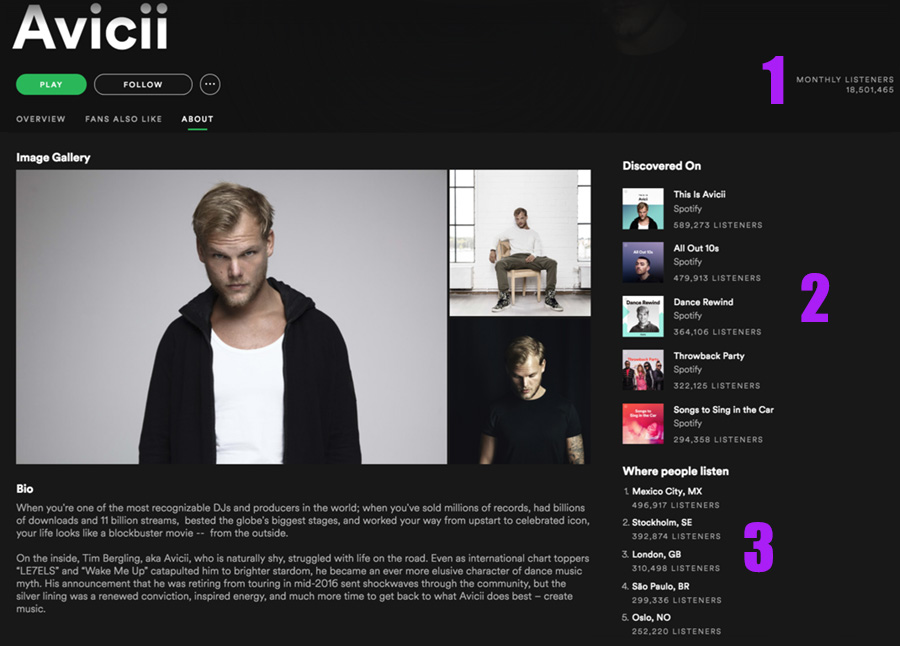 These stats are updated daily.

Botters usually create multiple playlists and generate fake followers and plays for each. When they get a big order of streams for a track, they’ll put that track on each of their playlists and sometimes reveal themselves on the “About” tab of an artist who’s paying for their service.

Red flag 1 – Where are people listening?

When I’m checking for the legitimacy of a playlist, the first thing I do is try to find an artist whose “Discovered On” (2) stats are representative of their “Monthly Listeners” (1).

Here’s an example I found: 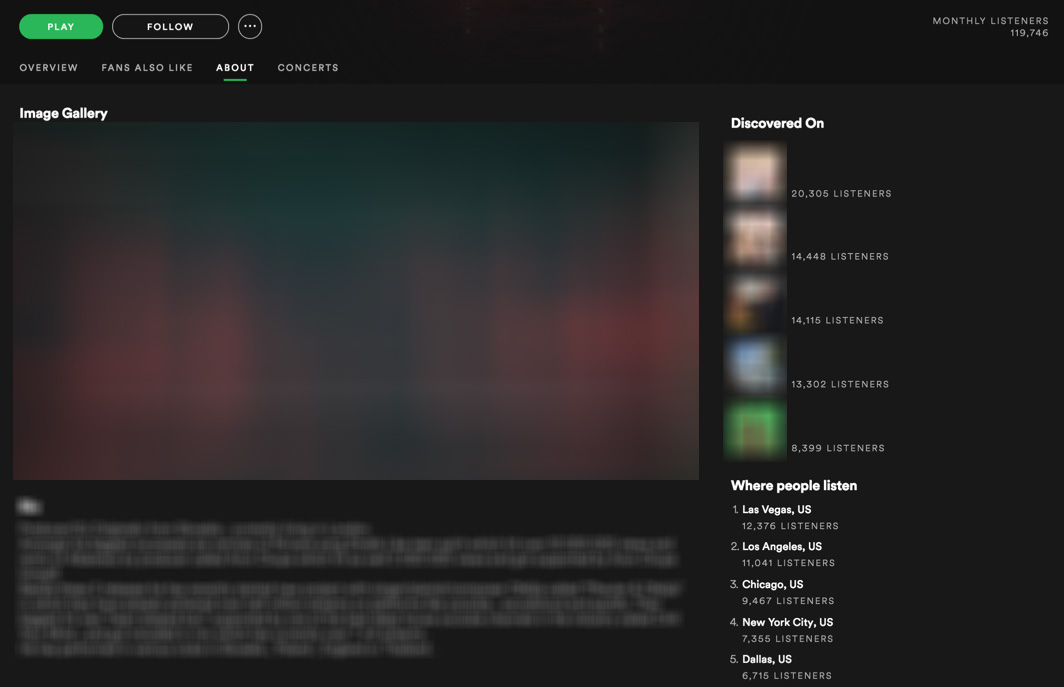 The goal of this guide isn’t to name and shame anyone so I’ve blurred out the names.

This artist has total monthly listeners of 119,756. The top 5 playlists come from the same ‘curator’ and have a total of 70,569 listeners. That’s 58% of the total monthly listeners. The “About” tab only shows the top 5 playlists but with some further digging, I found that this artist has his music in 9 more playlists from the same curator. In this case, it’s safe to say that the stats are representative.

The biggest data centers and the cheapest IPs are found in the USA. Botters usually buy in bulk and end up with IPs from 10-15 large cities, the most common being Las Vegas, Los Angeles, Chicago, New York, Dallas, Kansas City, San Jose and Houston.

We’ve analyzed hundreds of artist profiles and have found that legit artists usually get around 10% or less of their monthly listeners from their top 5 cities. Artists on botted playlists will often end up with 40% or more of their listeners from 5 major cities in the USA.

As you can see in the picture above, there are 12K listeners from Las Vegas, 11K from LA, 9K from Chicago, 7K from New York and 6K from Dallas – that’s 39% of the artist’s worldwide monthly listeners coming from just 5 cities (that all happens to be data center hotspots). The world is big, but not for botters.

Look at it this way, Dallas has a population of less than 1.5 million. That’s less than 0.5% of the US population. But artists using bots can have 6% or more of their total worldwide streams from there. A playlist that sounds specific to Dallas say for instance “Hottest hits in Dallas” could garner that kind of percentage, but for anything else, it just doesn’t add up. None of the 5 playlists blurred in the above screenshot have any connections with Dallas.

Red flag 2 – Look inside the playlist

It’s in the interest of fake stream providers to maximize their profits by filling their playlists with artists who are willing to pay their way onto the playlists. The first 8 sellers of fake streams we found on Google divided plays equally between all the songs on their customers’ playlists.

So if you see a playlist like EDM Top 40 and you haven’t heard most of the artists on there, there’s a good reason to be skeptical.

Red flag 3 – Is there a moderation process?

A playlist with a real and engaged following will have a curation process that ensures each track is a good fit. If you ask a curator to be on their playlist and they ask for money before even listening to your track – that’s a huge red flag.

Here’s a simple test. Send them the worst music you’ve ever produced and see if they blindly accept it.

Red flag 4 – Look at the ratio of saves to listeners

As we explained in our previous post, why fake Spotify streams are bad for you, bots will only play your music for around 30 seconds and will never interact with it by saving it. You can’t see that information from outside, but you can try to get it from someone already on the playlist.

What about bots from other countries?

A quick Google search shows that you can buy fake plays from the USA for as low as $2 per 1000 plays. Other countries were more expensive and we didn’t find anything cheaper than $5 per 1000 plays. It’s important not to make any sweeping assumptions. Not all the fake plays are from the USA and not all plays from Dallas are fake. All playlists have to be examined case by case.

Leave It to the Experts

As you can see, investigating playlists takes time, judgment and knowing what to look out for. New tools showing the devices used to stream and the Streams Skipped Ratio per playlists are popping up and help. But if you aren’t confident enough or don’t have the time to do it yourself, we can handle it all for you.

We guarantee that every playlist we get our clients on is genuine.

Send us an email to get your tracks heard the right way.